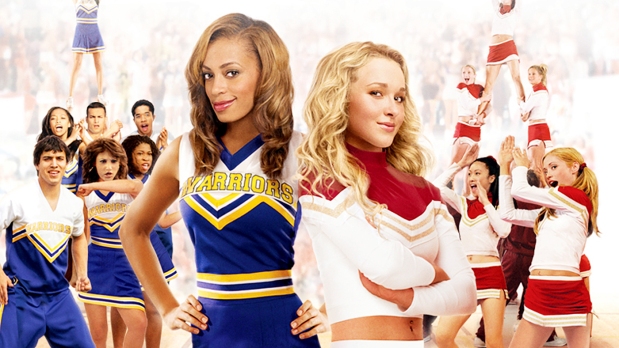 Bring It On: All or Nothing (2006) – Cheerleading | Choreographed Acrobatic Stunts

Starring: That White Girl in Remember the Titans and Beyonce’s Sister

How I Watched: On TBS

It’s that time of the month again. Just like last week presented the fall of some mighty good cinematic masterpieces, this week sees a whole new list of lovable flicks entering everyone’s favorite film streaming website. I see it as a monthly rejuvenation device, like a device that will rejuvenate you every month, and May 2016 has quite a few delights under its belt.

New this month is one of my all-time favorite films. It has humor and it has heart and it has Cathy screaming for excitement every time I see it playing on TBS.  If you know me, you know that I love cheerleading movies. There is just something that gets my blood pumping every time some teenage girl gets thrown into the air and caught by some burly kid. I love the cheers (“Boom-shaka-boom-boom” is my personal fave. Be sure to comment with yours) and I love the choreographed acrobatics.

So there is no reason, why I shouldn’t love Bring It On, a film that came out in 2000, which I remember because I went to see it with Phillip and Phillip broke up with me because of 9/11 in September 2001.  He said a love like ours couldn’t exist in a post-9/11 world, but I personally think his mom was pressuring him. But by then, Bring It On was out on DVD so I didn’t take it too hard. Cathy always survives.

But we aren’t reviewing Bring It On this week (we will save that for a ‘Film Favorites’ column), we are reviewing the third film in the Bring It On pentalogy and also the third film in “Cathy’s Ranking of Best Bring It On Films.” This is a review of Bring It On: All or Nothing. Much like the other films in the illustrious series, this film focuses on cheerleading. This film isn’t about white cheerleaders stealing routines from black cheerleaders, and being forced to come up with an original routine, and thereby winning the respect of the black cheerleaders. This film is about a white girl who has to GRADUALLY earn the respect of black girls, and she does so through the art of krunking.

Truth be told, I knew next to nothing about krunking before I saw this movie. And I presume you will know the same, so I will explain it to you. Krunking is a dance style, not unlike the fight dance style of Kevin Bacon in the film Footloose, but instead of fighting with a bunch of imaginary people around you, you mostly just fight yourself. It is a lot of stomping and a lot of grunting and if I didn’t know any better, I’d think my upstairs neighbor was a krunker (LOL I am just joking with you, Bets, if you are reading this. I love you.)

But in the end, not to spoil anything, the white girl, played by the white girl in Remember the Titans, gains the respect of the black girl, played by Beyonce’s sister. It is a family friendly romp with lots of heart. If you watch no other Bring It On film, watch this one. Or the original.

That is on Netflix also.

Cathy Gives It: I give this film 10/10 pom-poms, which are the fuzzy things cheerleaders wave around.

Similar Films: Bring It On, Footloose (the old one, not the new one, it was gross), That one movie with Channing Slater