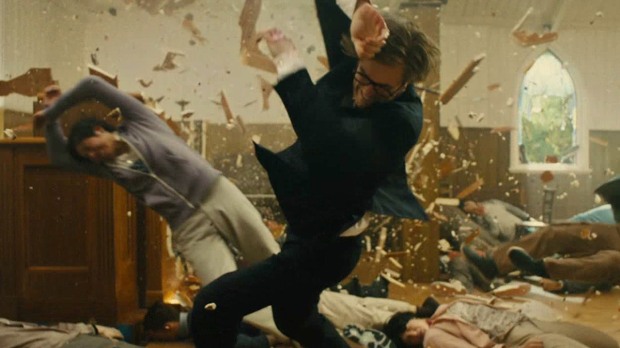 Best Line: “I’m a Catholic whore, currently enjoying congress out of wedlock with my black Jewish boyfriend who works at a military abortion clinic. So, hail Satan, and have a lovely afternoon, madam.”

Director Matthew Vaughn seems to know exactly what an audience wants when they go to a movie. Whether it’s 2010’s Kick-Ass or the excellent X-Men: First Class, Vaughn consistently provides a funny and violent trip that is sure to satisfy even the most jaded film-goer. When the TV spots first dropped for this one, I had my doubts – a lot of them. But when I finally watched it last year after a glowing suggestion from a friend, I realized I should never have doubted it at all.

If you appreciate stylized hyperviolence in films as much as I do, this is a crowning achievement in that area. There are certain scenes in this movie that will make your jaw hit the floor. Just like Kick-Ass, the film does not shy away from exceptionally bloody wounds that are so insane, you can’t help but laugh. Sure, they’re absolutely computer generated wounds, but god damn, they’re ridiculous.

Speaking of which, the best scene in the movie takes place in a Southern Baptist Church. This is where The Kingsman separates itself from the rest of the Spy Movie crowd. It is so out of control and  vicious that you can’t help but bust up laughing. Colin Firth goes full Rambo amid a moshpit of rabid Westboro Baptist-like psychos set to the wild solo section of Lynyrd Skynard’s “Free Bird.” It is honestly one of my favorite scenes in cinematic history and has to be seen to believed.

I can’t help but wonder what Hollywood would have done to this film had it not been so obviously British. It does not take the tamed approach to action films that Hollywood does and instead pours on great amounts of foul language and violence. Sure, a lot of it is bathed in a cockney slang that occasionally requires subtitles to translate, but that’s half the fun. Even Samuel L. Jackson has an accent in this. It’s not British, but it’s definitely a good time.

I think having a surround sound setup in a home theater is absolutely necessary to enjoy a movie like this. I know a lot of people out there don’t have one, but your experience will definitely benefit from it with this movie. A lot of the scenes feature some spinning camerawork and slow-motion choreography that is accompanied perfectly by the sound editing. Home theaters were made for films like this one.

One thing I can’t figure out is how McDonald’s managed to product-place itself so well in a couple scenes. This movie does not strike me as one that needs to do that like any Michael Bay ride, but there are a few instances that strangely pop up in The Kingsman. Don’t get me wrong, they use it in a way that is funny, but it is still extremely odd.

The acting in The Kingsman is great. With the main characters of Taron Egerton and Colin Firth accompanied by the likes of Samuel L. Jackson, Michael Caine and Mark Strong, the movie is in very good hands. And for those of you Star Wars freaks out there, there is even a Mark Hamill sighting. This one isn’t exactly going to pass the Bechdel Test, but hey, how many action movies do?

All you out there that have seen this, might (and probably will) be pleased to know that the sequel is in the works and is due to drop in 2017. With the likes of Channing Tatum, Julianne Moore and Halle Berry joining (as well as a rumored Colin Firth return), Kingsman: The Golden Circle should be just as fun as this one.

This one is really a great movie all around. The ending though, is perhaps one of the better payoffs I’ve seen in any film recently. There are quite literally fireworks used to end the story and it, like the church scene, is a laugher. By the way, any movie that manages to slip in some Bryan Ferry is going to win me over every time.