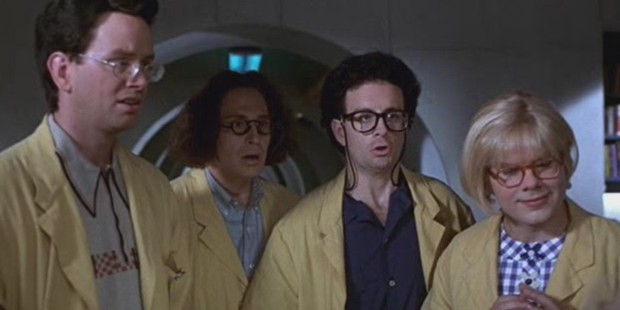 Starring: The Kids in the Hall

How I Watched: Laserdisc

Best Line: “Sorry we’re a few hours late, there, Ma, but you know how the kids…uh…hate old people.”

It’s not too often that a movie comes along and makes you feel like you got hit by a bus full of certifiably insane people. Brain Candy from the Lorne Michaels-produced Canadian comedy troupe, The Kids in the Hall does just that. This movie has enough craziness in it to make you question reality, and that’s not even taking the film’s plot into account. The five men in The Kids in the Hall play possibly more women in this film than men, and very often convincingly. This may be cliche, but this movie really has to be seen to be believed.

If you’ve ever seen The Kids in the Hall’s sketch show, you may know what to expect when you watch Brain Candy. It’s crass, ridiculous, out of control and so strange at times, that you may have to pause just to process what happened. The plot concerns a pharmaceutical company that has developed a drug that cures depression by clutching on to your happiest memory and replaying it over and over again. The doctor that developed this drug called ‘GLeeMONEX’ is pressured into releasing it to the general public before properly testing it and chaos ensues. The plot though, really plays second fiddle to the random shit that happens in the movie.

Just some of the characters that The Kids play in the movie include a clinically depressed grandmother, a gay father in homophobic denial, Mark McKinney doing a spot-on impression of Lorne Michaels himself, a character modeled exactly after Glenn Danzig, Brendan Fraser (what?!), a good number of characters that were developed in the show itself, and of course, the infamous Cancer Boy. The film actually met a lot of protest due to this character, a young boy with terminal cancer that just recites incredibly depressing facts. He actually only has a tiny bit of screen time, but I honestly find it to be one of Bruce McCulloch’s best characters, even if it is horribly insensitive.

Now, there is no way I would consider this a great film, or even include it in the list of the best comedies that I’ve ever seen. What Brain Candy is however, is a refreshing hour and a half of a very funny group of people unleashed in the world of R-rated comedy. The laugh-tracked show was first broadcast on the Canadian CBC and later picked up in the US by HBO. It ran for five seasons in the late 80’s and early 90’s and in my opinion, is the pinnacle of sketch comedy. It defied many of the rules laid down by SNL and others, and it almost seems as if it was Lorne Michaels’ outlet for weirdness that he could not broadcast on NBC.

Brain Candy does have its share of problems, though. I’ve read before that they wanted to include more to make the film substantially longer, but I think that would have made it even more chaotic than it is. Even the trailer is packed full of scenes that didn’t make the cut (including an appearance by Janeane Garofalo). Like their sketch show, a lot of the storylines in the film have nothing to do with each other, except for when the characters are affected by GLeeMONEX. The movie just feels a bit too out of control, but I hope someday there is some kind of “Ultimate Edition” that The Kids originally wanted us to see.

You can’t let these minor problems get in the way though. Brain Candy is absolutely strange and stands on its own as a great feat in the world of Cult Classics. It is unfortunately hard to find these days and as you can see above, the only copy I own is on Laserdisc. You can get the DVD online pretty easily, but it’s not exactly cheap if you want a new version. If you do find yourself lucky enough to happen upon it though, do yourself a favor and pick it up. I guarantee you won’t regret it.