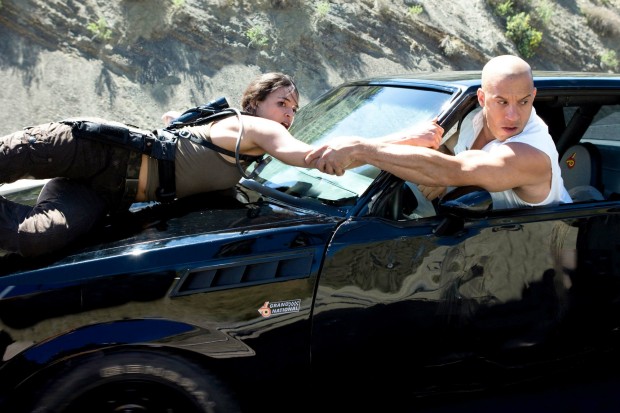 A little bit about myself before I start this review. I am a father of three and as fucking vanilla as they come. I have missionary sex and know next to nothing about cars. But after watching Fast & Furious (or Fast 4 to us, Fastiacs), a movie that is like the first except willing to forgo definite articles, I am cruising through Craigslist, checking out cars, saying things like “drive train” and “capistulators” or “pass me a Monster Energy Drink.” I am searching YouTube vids on how to replace the spoiler sticker advertisements on a BMW 9000 just in case that may come in handy someday.

But anyway, Dom is back, motherfuckers; so is Letty and so is Brian, and unfortunately so is Jordana Brewster’s character. So yes, this is my third entry and the fourth film and if your math sensors are flaring, it may be because I don’t follow no fucking rules. But seriously, every online authority on the topic suggests that I watch the films in this order, cause that fits the chronology of the “story” in the franchise.

So this film starts with the gang back together as they try to run a heist on a moving fuel tanker. The stunts are terrific with Letty jumping around on the back of the semi-truck. Peril ensues. They barely make it out with their lives, and so Dom decides to leave the love of his life and break up the crew as to save each other the inevitable death that awaits them at the end of Crime Blvd. But guess what? Letty dies anyway. So Dom must avenge his fallen love. Brian is an FBI agent looking for the same peeps, so the two paths crossyet again and the greatest bromance to ever exist is rekindled once more. They must go undercover and defeat a drug lord.

Sound familiar? Much of this film’s plot is recycled from 2 Fast 2 Furious. Yet, far better executed. Justin Lin directs this film and finally after 8 years, the films about the coolest motherfuckers on Earth, actually looks cool. The film has a cohesive look throughout, although, if I am going to act like a grandpa, I will point out that some scenes were really fucking dark, being able to barely make out the muscle cars speeding through a Mexican cave. Maybe I need to turn up my settings. It is fun to watch for the most part, outside of the weird scenes that seem destined only to make frat guys cheer: like putting away a fellow racer on meth charges or the various lesbianic kisses as set pieces to show how cool the surrounding guys are.

Every one finally learned how to act in this one, which is strange, but maybe Tokyo Drift (the third flick featuring no original cast members besides Diesel) was a wake-up call for all involved. Paul Walker RIP is brunet in this one, which makes his eyeballs even more blue. I got so lost in them that I would crash into a telephone pole too. Jordana Brewster still makes me wonder why she is present at all. Gal Gadot is in this and she is pretty cool, although comes across as a love interest for Dom, with whom she has absolutely no chemistry. Also, Vin Diesel wears a ton of different V-necks in this and not your expensive Express for Men v-necks, but like the sorta see-thru Hanes ones so his nipples are just present in most scenes.  Tyrese just takes his shirt off in the second one a bunch but that is a welcome addition to all films.

The racing and chase scenes are still pretty cool to watch, yet I wouldn’t be able to relate to you any stunt that was really cool. Just a lot of the characters talking to each other despite being in separate cars. There is a really cool scene toward the end in which they kidnap the druglord in Mexico and try to get him back into USA, a la Dog the Bounty Hunter. They are chased through the desert by shooting gangsters in a scene the most recently feels reminiscent of Fury Road, but has its roots down the line of 70’s American action flicks.

My one complaint is that Nos was featured so little in this movie and when they finally hit the button to send them flying, instead of the Rainbow Road-everything gets blurry shit, you just see their heads push back into the headrests. Probably much more realistic, but less iconic.

Terrific fucking film. Fun, better plotting and better acting. Okay stunts. I’d check it out, but wouldn’t make it my go-to if I felt like watching a balls out balls deep car chase movie. Definitely love the direction of the series so far.