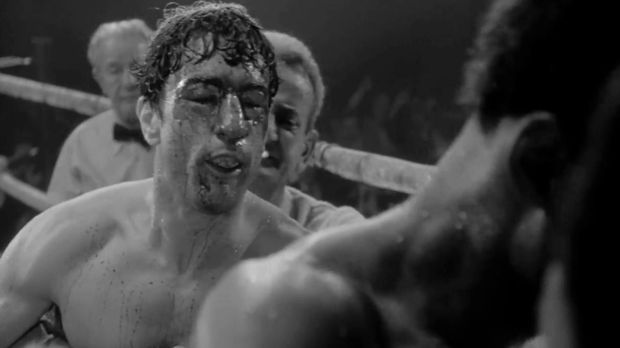 What is ‘Sloppy Saturdays’?

I realized that I own over 300 movies, many of which I have not watched a second time. Whether on Blu-Ray, DVD, or the legendary LaserDisc, I have a lot of films I need to watch again. So, I’ve decided I should probably go through these and justify why I own them, and perhaps, why you should too. I put them all into a database and will randomly mix them up once a week. Come back every Saturday for a new review.

Format I Own: Blu-Ray 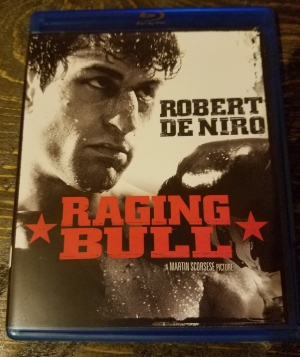 Raging Bull is the story of Jake LaMotta, middleweight boxer and serial wife abuser. A genuinely hard film to watch at times, Robert DeNiro earned every bit of the Oscar gold that came his way after this movie dropped. Cathy Moriarty brilliantly plays his wife, Vickie, and Joe Pesci is introduced to the acting world as his brother, Joey. The film follows LaMotta’s rise and fall in the ring from 1941 to 1964, as well as his explosive temper outside the ring. The American Film Institute has recognized the film as #4 in the greatest 100 American films, and the #1 Sports film of all time.

What initially drew me to Raging Bull years ago, was Martin Scorsese’s name. I admittedly had not seen a great number of his movies, but I adored Goodfellas, Gangs of New York, and being relatively young, The Departed, of course. Since watching Raging Bull, I’ve definitely expanded my Scorsese horizons, but this one is absolutely one of his best. It’s absolutely beautiful, especially on the Blu-Ray copy. The fighting montages are brilliant, the score is haunting, and the cinematography by Michael Chapman, which contrasts deep blacks and popping whites (this is a black and white film, by the way) is incredibly stunning.

DeNiro, as I said above, is wonderful in this. He pulled a Christian Bale and gained more than 60 pounds by the time the filming was complete to play the older version of LaMotta. The makeup applied to his face to make him look like a worn fighter is more than uncomfortable to look at. He won his first and only Best Actor Oscar (he won Best Supporting Actor for Godfather II), and deserved every piece of that statue. Pesci, who was both virtually unknown, and making his first Scorsese appearance, is incredible as DeNiro’s brother.

The sixth and final fight with Sugar Ray Robinson is the most beautiful scene in the film. Almost all of the fighting sequences are great, as Scorsese zooms in on the fighters and allows the sound to go silent, as the score weaves in and out of the fists in slow motion. But something about this final fight sequence just gets me. The high contrast of the scene is mystifying. At one point, Scorsese chooses to turn the sound off and the camera zooms in on Robinson, breathing heavily as LaMotta is collapsing on the ropes. The build-up to the final punches is huge, as blood sprays in jets from LaMotta’s head, covering the crowd and announcers in a sea of blackened gore. It’s gorgeous.

Jake LaMotta seems like he was a real asshole. Not only does he kick the shit out of Joe Pesci’s character multiple times, for seemingly nothing, he abuses two of his wives, both mentally and physically. If you’re at all familiar with the previous film Scorsese did with the screenwriter Paul Schrader – Taxi Driver – you might know what to expect: a gritty, unflinching portrait of a man with a lot of fucking problems. Raging Bull is no different, and Scorsese does not let up in the lip-biting viciousness of LaMotta’s character. Like I said, at times, this is a difficult film to watch.

How You Can Watch