Okay first off, don’t name an episode Eastwatch, tell us a great battle is going to take place there via the flames The Hound sees, and then not give us a big battle at Eastwatch. Also, let’s assume that this episode takes place over several months because holy shit there is a lot of time traveling of characters here.

Jaime and Bron survive the dragon attack, yippie. Jamie heads back to King’s Landing and he wants to convince Cersei to surrender after realizing that Daenerys has THREE dragons and he just saw the damage one could do. He heads back to King’s Landing to tell Cersei that they can’t win, but she’s in so over her head at this point giving up would actually be the crazy thing to do. The best bit of this scene is Jaime telling Cersei that Olenna killed Joffrey. The classic stone cold bitch face Cersei gave was epic.

At the remnants of the battle, Lannister men are left to bend the knee or be killed. Sam Tarly’s father and his brother refuse, so Dany burns them alive. Quickly, the rest bend the knee. Tyrion and Varys aren’t sure that was the right move on her part, but I think it was and I agree with it. Sam’s dad is a dick anyway, and now Sam’s officially Lord of The Reach so that worked out.

Back in Old Town, Slughorn doesn’t want to tell Sam that his brother and Dad are dead, and Sam bounces out of Old Town with Gilly and little Sam and fuck ton of stolen books about White Walkers before he can. Sam is tired of the Maesters not listening to him about the Army of the Dead dangers so he peaces out. Also, he seems to not be able to stand another conversation with Gilly, who has learned to read, and is full of nonsense facts. Oh, except for the fact that she finds out that Rhaegar and Lyanna’s marriage was in fact legal because Rhaegar was granted an annulment to his previous marriage from a maester. Kind of a big deal. PAY ATTENTION SAM.

Bran (3EB) takes over the body of a raven to fly beyond Eastwatch. He see’s the army of the dead. Spoiler: it’s a lot of people. The only thing that’s going to kill them at this point is lots of dragon fire. Lots of it. 3EB has Sansa send a message to Jon about what he has seen.

Dany flies back to Dragonstone, landing in front of Jon hoping to impress him with her dragon. Amazingly, Drogon (who by the way has survived the spear in the side) lets Jon touch him. It’s that Targaryen blood baby! Dany is more than a little turned on. 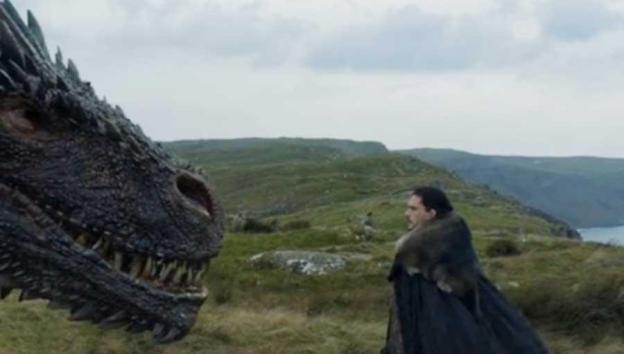 They go inside and Jon gets Sansa’s letter (he takes a moment to be happy that Arya is alive, yay!). Jon says he has to leave and fight the White Walkers. Dany is reluctant to lend help because the second she heads North, Cersei will take the country over. Tyrion thinks that if they can bring back one soldier from the Army of the Dead, then she will create some sort of truce to let Dany fight them and maybe surrender in turn? I’m sorry, have you met Cersei? That bitch isn’t surrendering to ANYONE. She would rather watch an Army of the Dead burn the entire world down than do that. Come on you guys. This is kind of a worthless mission. Tyrion says that the only person Cersei listens to is Jaime and if he can get Jaime to convince Cersei to agree to have them bring a White Walker in, all their problems will be solved. Right. Okay.

In more bad news at Winterfell, Arya thinks she is being sneaky and tailing Petyr. She finds a scroll he has hidden and it looks like it’s from Sansa to Robb. The letter that Cersei forced her to write telling Robb to bend the knee a long ass time ago. Not sure what Arya makes of this information, but she’s onto Littlefinger. Oh except Littlefinger is playing her like a fucking fiddle. He planted the evidence and watches her find it. He is trying to create a rift between the sisters and my anxiety about this is HIGH. SUPER HIGH. Arya already confronted Sansa earlier saying that she sees Sansa is hoping Jon won’t come back and that she will get to stay Lady of Winterfell. THIS IS NOT GOOD.

Davos takes Tyrion to King’s Landing (everyone is traveling A LOT right now, VERY quickly so just ignore that otherwise the entire thing will drive you crazy). Tyrion gets Bronn to set up a meeting in the Catacombs with Jaime while Tyrion tells him his plan. Tyrion tells Jaime that Dany will win the war, but she’s willing to suspend hostilities if Cersei will let them bring a dead/alive zombie thing to her. WHO THOUGHT THIS WAS A GOOD IDEA? Jaime goes up to tell Cersei about the meeting but she already knows about it (oh snap). Jaime tells Cersei about the dead men and the armistice, but Cersei just laughs and tells Jaime that she’s pregnant with his baby so now they need to fight for the baby. Jaime for some reason is charmed by this and seems to concede with Cersei who says that he better never betray her again. Davos goes to find good old Gentry Water’s, Robert Baratheon’s bastard son who he last saw rowing away after he helped him escape the Red Woman. Gendry’s weapon of choice is a giant hammer and he kills two Lannisters on the way out of town with Davos and Tyrion in tow.

At Dragonstone, Jorah shows up and is super friendzoned again. Once he sees his new competition in Jon he sadly gives up once more. Dany doesn’t want Jon to go, but doesn’t say it out loud. It’s just super obvious. Even Tyrion sees it. Jon kind of is into it but he’s too busy brooding about White Walkers so he takes off with Jorah, Davos, and Gendry to Eastwatch.They are going to kidnap a White Walker to convince Cersei (good luck with that!) to stop fighting for a bit while they save Westeros from an Army of the Dead. Jon and Gendry meet and bromance it up, thrilled to meet each other since they knew each other’s father’s. Gendry essentially is like, “Hey bro we’re both bastards, our dads are both dead, let’s be best friends and kill some White Walkers”. At Eastwatch, Jon, Thoros, Bedric, The Hound, Tormund, Gendry, Davos and Jorah all go beyond the wall to get themselves a zombie. It’s a pretty impressive group actually and they might just have a shot.

Gendry: You came to get me. You want me to come with you

Davos: Well, the thing you need to understand is…..

Dany: I’ve grown used to him