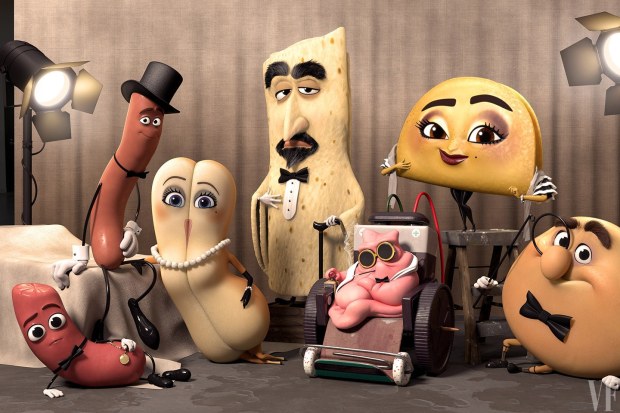 Starring: A Grocery Store’s Perishables, Non-Perishables and a Douche

How I Watched: Theaters

This is an incredibly difficult movie to review. While the content of the film is not exactly heavy or too cumbersome to tackle thematically, Sausage Party is full of unexpectedly creative ways of presenting religious and existentially deep concepts. Now before you run away from this review, just hang on a second. Sausage Party has enough topical humor to keep the average stoner (and non-stoner) familiar with Rogen and Goldberg’s body of work entertained for its quick, 89-minute running time. The one-liners are great, the animation is hysterical, and the voice actors are just as funny animated as they are acting in movies. This film goes deeper than that, though. I think this is why the review is so hard to write. There is so much buried in this story, that it’s difficult to discuss without spoiling the plot.

So here goes. Those familiar with The LEGO Movie might best understand where I am going with this review. My girlfriend’s Film professor at the time of its release, was giving out extra credit to his students that went and saw it in the theater, so I very hesitantly went along with her. To my surprise, the arcing theme of The LEGO Movie was rife with deep philosophical metaphors meant for the parents of the children they were attending the movie with. What I walked away with was a semi-permanent grin that did not dissipate for about a week. I walked away from Sausage Party with that same grin.

I suppose if you let it hit you that way, Sausage Party could be a very stupid movie; the same way that Toy Story could be. Yeah, they’re seemingly inanimate objects talking amongst themselves when the humans are not looking and that’s absolutely ridiculous, right? Yeah, it is, but only if you let it be you unimaginative dickbag. If you have any sense of wonder, Toy Story caught and tugged at your heart as you watched those toys fight for their place in the universe. Sausage Party is no different.

Actually, it’s way different. I think the animated characters said “Fuck” more times than any movie that’s come out so far this year: 160+ according to pluggedin.com (who also mentions that “God’s name is misused at least 20 times…” *insert eye roll here*). If you’ve seen the Red Band trailer, you’ll know there’s also some vicious mutilations and enough sexual innuendo to make Paul Reubens happy in an empty theater. So yeah, I guess it’s different from Toy Story and The LEGO Movie. Vulgarity for vulgarity’s sake aside, this is a smart and viciously hilarious movie. A lot of the jokes will go over Millennials’ heads, including a very Jewish bagel that sounds like an Annie Hall-era Woody Allen on Freud’s couch, or perhaps even the scientifically philosophical musings of a Stephen Hawking-inspired piece of chewed gum.

If you don’t like Goldberg and Rogen films (Superbad, The Interview, Neighbors, etc.), chances are you won’t like this one either. It features Rogen’s character, Frank, pretty heavily throughout and yes, he’s guilty of the same style of comedy that he always is (which I find hilarious). There are cheap laughs, but a lot of people might be pleasantly surprised by the voices coming out of these character’s mouths. I think my favorite was that of Nick Kroll’s, as a walking douche. Those familiar with his Comedy Central show (Kroll Show), will immediately recognize one of the voices he uses, and it made me laugh any time he said anything in Sausage Party.

Sausage Party isn’t perfect. It probably isn’t even the funniest movie that I’ve seen this year. It is however, unexpectedly smart and it will probably even make you feel guilty for eating popcorn while watching. It is a great way to spend an hour and a half on a hot summer night, so get your friends, have a few beers and go to this summer’s funniest movie. And for The Gods’ sake, leave your damn kids at home!