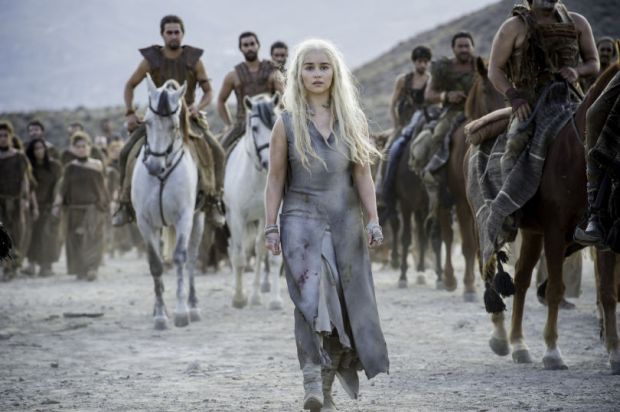 It was the fart heard round the world. Somehow in all the of the deaths we have had on Game of Thrones, old ass Grand Maester Pycelle is still alive and farting. I had to pause the show for a good seven minutes so I could laugh at the absurdity of the moment, so in the spirit of farts let’s kick this review off in King’s Landing.

Cersei’s creepy Doctor Frankenstein guy is now trying to control Varys’ ‘little birds’ which turn out to be the little children of flea bottom. He is looking for dirt on the High Sparrow and it’s only a  matter of time before he gets it. Ser Gregor the zombie gives Pycelle a look so scary he farts his pants. Jamie and Cersei are denied seats on the small council, and Tommen goes to visit the High Sparrow in what seems to be a display of his power, but really just shows how terrible he is at ruling. I’d guess Tommen only has a few episodes left in his life, and I’m betting this is the last episode everyone shits all over the Lannisters.

Jon Snow is alive, and as much of a moral downer as always so it’s safe to say death hasn’t affected his personality much. The Red Woman is so astounded, she is annoyingly convinced the Lord of Light has brought him back for a reason, but last time she thought the Lord of Light had a purpose for her,she burned a little girl alive. Maybe think twice before you make such great assumptions. For those of you Redditors frequenting r/fuckolly, your subreddit is no longer valid. Olly has been fucked, and hanged. I’m disappointed Ghost didn’t get to eat anyone’s face off, but I guess Jon has to sentence the traitors to death with ‘dignity’, or whatever. Jon Snow ended the storyline at the wall tonight, by dropping the mic with a “and now my watch has ended,” giving his lord commander cape to his friend Eddison. I’m sure by now there is a thug life gif of the moment somewhere on the internet. I’m all for it. Let’s get Jon away from this shitty never ending wall storyline and back into the REAL fight.

Ever wondered what happened to the littlest Stark boy? Rickon? Well he ran away with Osha and Shaggy Dog (I DON’T WANT TO TALK ABOUT IT, I WILL JUST END UP CRYING), and it seemed he would never be heard from again, but at least he would be safe. Well, looks like he’s been caught and is now in the arms of Ramsey. So…RIP Osha and Rickon’s  ‘body parts,’ whichever Ramsey chooses them to be.  Maybe Ramsey will use Rickon as a bargaining chip for Sansa to come back? Just when things seemed to be going so well.

In the BIGGEST upset of the week (yes, even more so than Shaggy Dog’s head on a spike), it looks like we have to follow fat Sam and Gilly to Oldtown. First Sam must stop and try and convince his complete asshole of a father to keep Sam’s ‘bastard,’ and Gilly safe while he goes off adventuring.

Bran has what we think is going to be THE vision. THE VISION THAT WILL CONFIRM ALL OF OUR THEORIES! But alas, the old tree man blue balls us, and pulls Bran away from the truth JUST as we are about to see WHAT IS IN THAT GODDAMN TOWER. The most interesting part of this bit (besides the awesome choreographed fighting), is seeing that Bran might be able to manipulate the past. So no Tower of Joy confirmation theories this episode. Ah well, too much good news too soon is never a good thing.

Dany finally arrives in Vaes Dothrak, and since she ‘went out into the world’ instead of going straight to Vaes Dothrak after Kahl Drogo’s death, she is going to have to go through some kind of trial to decide what her fate will be. Will they let her stay in Vaes Dothrak or will she be punished for breaking the rules? Probably neither. ‘That guy she is sleeping with’ and Jorah will put a stop to it before it comes to that. What a sad plot for the Mother of Dragons.

Varys finds out that the slave owners in neighboring cities to Mereen are funding the Sons of the Harpy rebellion. A fight will have to happen, and I’m hoping dragons are involved. If they’re not, I can guarantee we are in for a snore fest the rest of the season.

Arya trains until she is rewarded her eye sight back. I think it’s time to do some killin’, and get this storyline back on track.

Overall it wasn’t a great episode. Not a lot happened, but I can forgive that because the writers have brought us Jon back. The only thing that is going to piss me off is if Sansa shows up at the wall after Jon leaves. I cannot STAND this almost missing each other thing that the Starks have going on. It drives me insane. Until next week.