The O.C. Sundays – Volume Eight – Season One: Episode Thirteen – The Best Chrismukkah Ever

Welcome to Chrismukkah and yes I know it’s July so just relax. We’re doing this thing six months early. Chrismukkah is one of the essential things that makes me love this show. It’s the holiday season and Ryan has never really done the holiday thing, but Seth however is a seasoned expert. Since Kirsten celebrates Christmas and Sandy celebrates Hanukkah, Seth grew up celebrating both and is kind of obsessed with the entire thing.

Seth explains: “It’s eight days of presents followed by one day of many presents.”

The next day, Seth is wrapping the same exact gifts for both Summer and Anna. Ryan says he’s going to have to choose soon, but Seth refuses to do so because that would ruin Chrismukkah. They go into the kitchen where Sandy announces that Chrismukkah is ruined.

Caleb decides he wants to bring that whole court case to trial rather than settle so Sandy and Kirsten will have to spend all week preparing for the case.

Jimmy has a job interview and Marissa tells him she wants to skip Christmas because holidays make people depressed. Jimmy asks if she’s depressed because she was supposed to go to therapy after her OD in Tijuana and that never happened, but don’t worry Marissa is due for another mental breakdown to move the plot along *whisper screams ‘OLIVER, OLIVER, OLIVER’*.

Seth and Ryan are discussing a big Christmas party that the Newport Group is throwing and how he invited both Anna and Summer but he doubts it will be an issue. Then Anna and Summer both show up at the same time asking what time the party is. Ryan gives him a ‘fucking told you so’ look. Marissa complains to Ryan about the holidays and after school they go to the mall to shop for Christmas gifts. Insert random mall shopping montage.

Marissa says she can’t afford anything at the mall and they leave. Then she gets caught in the parking lot for shoplifting and Ryan looks betrayed about it for some reason. SHE GOT PROBLEMS YO! Or did you forget she tried to kill herself just because we didn’t talk about it for like five episodes? Julie comes over to yell at Marissa and Jimmy and basically makes everything worse. Julie schedules a therapy appointment for Marissa *whisper screams ‘OLIVER, OLIVER, OLIVER’*.

Seth asks how the mall was: Ryan tells him about Marissa shoplifting and Seth gives Ryan a stocking with his name on it. Ryan is clearly touched and it clearly made me cry like a baby.

Kirsten goes to visit Caleb and tell him she’s taking a Christmas vacation and she’s not going to help him with the case for the next two weeks. She goes home and starts working because she’s very bad at not working. She finds a document in her files that concerns her. Sandy comes home for the party excited that Caleb asked for more money and his firm agreed and they settled the deal. Kirsten hands Sandy the document that concerned her earlier knowing that she will probably get fired for it. Sandy says it changes everything. They go to the party essentially to confront Caleb and have more DRAMAAAZZZ.

Anna shows up to Seth’s house and then Summer shows up. Both are peeved because they said they would all meet there and it breaks their weird Switzerland code of being completely neutral about their feelings.

At Marissa’s, Ryan tells Marissa that he thinks the therapy is a good idea and then Marissa loses her mind about him thinking it’s a good idea because she’s insane. Ryan goes to grab Marissa’s things and she sneaks and entire bottle of liquor into her purse, which I swear the only purses she owns are ones that fit entire liquor bottles in them and nothing else. At the party, Julie and Marissa fight in between an awkward Ryan. Marissa storms off to go chug down some booze and Ryan and Julie both find common ground in their distaste for the holidays.

Sandy finds Caleb and hands over the document Kirsten gave him. It’s a geological survey that Caleb did of the heights and didn’t turn over to Sandy’s office. Apparently, the heights is seismologically unsound so the entire area isn’t insurable and worthless. Yet, he settled an agreement earlier having Sandy’s company pay him millions of dollars to not build on the property, which it turns out he wouldn’t have been able to do anyway. Sandy says he wants to buy back the heights for a dollar. Caleb has no choice but to do it and he does it very publicly in front of everyone at the party. It makes him look generous AF but Sandy is loving it anyway.

Anna gives Seth his present. It’s a comic book she drew of him and his plastic horse. It’s creative and smart and funny. Thumbs up Anna.

Seth finds Summer and she takes him into a room to give him his present, and it’s honestly (not hard) to tell which one he liked better.

Anna walks in on them and feels like a child for making a comic book and Summer feels like ‘wonder whore’. They say they’re done playing games and Seth needs to choose one of them. He tells them both he wants to be their friend and they say they don’t want to be his friend. So he’s gotta DECIDE.

Marissa comes back from the bathroom drunk AF wanting to dance and make out with Ryan. Ryan says it ain’t cool. She passed out in her driveway and he took care of her, then in Mexico and he says it’s like his Mother all over again. Fuck Ryan. GTFO of that relationship STAT. Marissa freaks out and tries to leave, but Ryan tells her she can’t drive out of here, she gets in the car anyway and backs into someone. Ryan drives her home but apparently she can’t wait to pour up again so she opens her bottle in the car and loses the cap to her bottle so she can’t put it back in her purse. 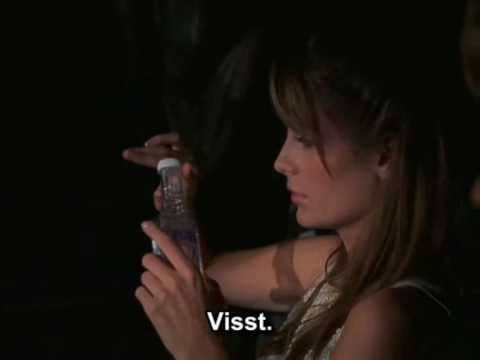 Ryan is like WTF yo problem B. It’s the perfect time for a cop to pull them over! That broken taillight from Marissa being a terrible drunk driver has come back to haunt them. The cop almost asks Marissa to get out of the car because she looks faded to all hell. Luckily he gets a call and has to let them off with a warning. The cop leaves and Ryan gets out of the car, searches frantically for the liquor bottle at Marissa’s feet and throws it off a cliff. Then he slams the passenger door a billion times, which scares Marissa and he says good because she’s scaring him. The next morning Seth tells Ryan about his night of women and Ryan tells him about Marissa’s fucked upness.

Seth: “Hey I really like Marissa, she’s making life interesting for you.”

Interesting is one word for it, Seth…shitty is another.

Ryan reiterates that he hates Christmas, and Seth says really it’s a Chrismukkah miracle. The old Ryan would have been busted for sure, but since Ryan had Jesus and Moses working for him this time around he got off with a warning. For some reason Ryan takes this to heart.

Caleb comes over to yell at Kirsten, but ends it on a positive note saying that it was clearly a good business decision. Ryan tells Sandy he’s going to go with Marissa to the therapist and Sandy suggests he just be a kid for once and enjoy the holiday with this new family. Right on Sandy. “You’re here with us now, you don’t have to be the parent anymore.” EXCEPT THAT BECAUSE HE DIDN’T GO WITH HER WE NOW HAVE THE PROBLEM OF *whisper screams ‘OLIVER, OLIVER, OLIVER’*.

Marissa shows up to her appointment and a boy her age is across from her. She gets nervous and stands up to leave, but then the boy says it took him three times to walk through that door on his first visit. He says he knows Marissa because she organizes events at the school. He says he goes to Pacific school. So that’s weird, why does he know of her if they don’t go to the same school. I’d like to introduce a segment down below called “Obvious Reasons to NOT trust Oliver Trask”. It will be a temporary segment until the Oliver episodes are over (which if you couldn’t tell by my wrestlemania whisper scream, are some of my favorite episodes). Oliver introduces himself and asks what is wrong with Marissa. He analyzes that Marissa isn’t an alcoholic -yet, but she’s probably OD’d at least once on muscle relaxers…Marissa says it was painkillers and she is somehow clearly impressed by this information he has guessed about her. OR HE HEARD IT FROM SOMEONE SINCE HE KNOWS OF YOU MARISSA. GOD YOU ARE DUMB. Marissa goes into her therapist’s office clearly excited about the prospect of a new friend in Oliver. Oh you are in for some shit Marissa gurrrrl.

At The Cohen’s, Ryan goes to hang up his stocking and the family looks on with impressive tears in their eyes. How cute. Hold on tight for the next few episodes though because we are here: THE OLIVER EPISODES.

“Maybe This Christmas” by Ron Sexsmith

If this show aired today, Summer’s Wonder Woman costume would have been from the recent film. Instead it just looks dated albeit, classic.