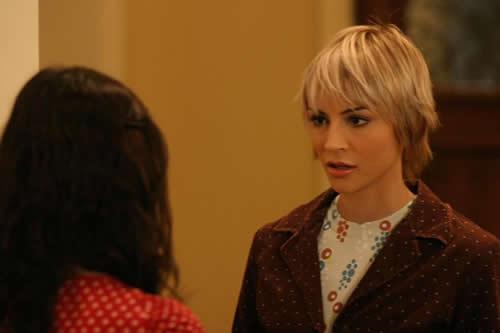 Ryan and Theresa kissed, and now Seth wants to know all the details. The morning after, he pesters Ryan for all the details, not just of the kissing, but of Theresa’s plans. If she’s dropped out of high school to get away from Eddie is she going to keep a permanent job down in Orange County, is she going to sign a lease, is Ryan going to commute to Chino and back to see her if she decides to go home. Valid questions. As we are getting to the bottom of this Theresa shows up to see if Ryan and Seth want a ride to school, just as Marissa shows up to ask the same thing. Awkward. They gotta wrap up this ‘love triangle’ where Marissa seems to be the only one who doesn’t realize she’s not exactly wanted around anymore.

Kirsten lets Sandy know that Caleb has been named Newport ‘Man of the Year’ and they are going to host the award reception at The Cohen’s. Kirsten asks if Sandy is going to take the case of the Drunken Uncle. He hasn’t told her yet that if he doesn’t then she could be in a lot of legal trouble, but his god damn Sandy Cohen moral responsibility is killing him.

Marissa asks Luke (who is banging her Mom, and she has no idea) what it was like for him when they broke up and she started dated Ryan. Someone is upset about Theresa. Luke says it sucked. Marissa goes the friend route again with Ryan and tells him that if he or Theresa need any help with her moving here or whatever she decides to do she can help. At lunch, Seth, Summer and always third wheeler Anna talk about Newport life and Anna says she’s moving back to Pittsburgh (thank god), which shocks Seth and Summer both. Ryan meets Theresa for lunch and they look at the classifieds to see if any jobs show up that interest her. It’s like Ryan is dating an adult and he is still in high school. Because that’s exactly what is happening.

Sandy: You’re in high school. She should be. You’re both in way over your heads. She’s got no real job. She’s got no place to live. And please don’t ask me if she can stay here. Theresa’s got family in Chino. She’s got a life in Chino. Running away is not the answer.

Well said. At dinner that night, Caleb is over and asks if Sandy is going to take the case. Sandy says he will if Caleb confesses to Kirsten the truth about Drunk Uncle. Ryan goes to the Mermaid Inn to tell Theresa to go home, but she has just gotten off the phone with Eddie telling him she’s not going home any time soon. The next morning, Seth gets incredibly self involved and obsessed with Anna leaving somehow being his fault. Kirsten meets Caleb for lunch and he tells her all about Drunk Uncle and how he’s ‘accidentally’ stumbled into important people’s hotel rooms for information before….but this is the first time he’s gotten caught. I’m pretty sure it’s before noon and Kiki is already drinking. When you’re Dad is a dick and gets you into legal trouble without your knowledge you drink early. Kirsten tells Sandy to not take the case. She will get outside counsel because she doesn’t want him involved.

Marissa tries to talk to Ryan at lunch about homework, when Eddie breaks into the school and confronts Ryan. He looks like he’s 40 so he quickly is told to leave by a teacher. Eddie asks if Ryan has slept with Theresa and he says no. Eddie promises he’s not letting Theresa go without a fight. Marissa witnesses everything and later asks Ryan if Theresa wants to come to Caleb’s party. Ryan says she doesn’t have a dress for something like that and then is incredibly rude to Marissa. Nice job Ryan. No seriously, nice job. Butt out Marissa.

Ryan goes to Theresa’s hotel and they proceed to sleep together. Eddie watches in his car outside, and thinks that Ryan lied to him. I mean he technically didn’t. When Eddie asked if they slept together they hadn’t yet. And now they have. Oops. Ryan kind of half heartedly invites Theresa to Caleb’s party the next morning, and since she gets the feeling that he doesn’t actually want her there she says she doesn’t want to go.

Sandy goes golfing to find an old DA buddy of his trying to get information out of Drunk Uncle as to who he works for. This worries Sandy because Kirsten is probably screwed, but the DA lets slip a lead that Sandy might be able to take advantage of. Marissa stops by Theresa’s hotel to see if she wants to go to the party and brings her dresses of hers to try on. Summer talks to Ryan about how Marissa still loves him, and that the Oliver thing was messed up but that Marissa makes mistakes just like everyone else. Except you know, her mistakes usually involve someone going to jail or dying. On cue, Marissa walks in with Theresa much to Ryan’s surprise. Anna shows up to say goodbye, but can’t bring herself to say bye to Seth so she gives Ryan a letter to give to him instead.

Luke flirts with Julie and Jimmy notices right away. Pretty gross. Jimmy tells Julie that if Marissa finds out it would destroy Marissa. Julie denies everything. Sandy gets an important call and goes to tell Caleb that he can make everything go away if Caleb agrees to an under the table deal to make some guy their chief lumber supplier for their next contract and it’s gonna be expensive. Essentially Sandy has broken the law to make sure his wife is protected. Meanwhile, Eddie shows up to confront Ryan and realizes it’s an open door party so he walks right in. He confronts Theresa, and Ryan of course steps in and ends up getting punched and ruining the party. Theresa says she needs to sort things out with Eddie. 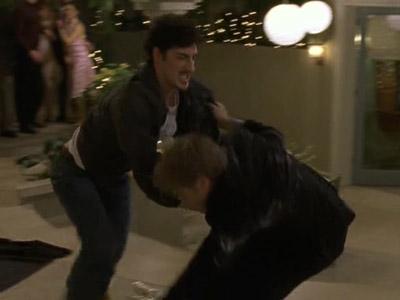 Seth says he can’t believe Anna didn’t show up and Ryan gives him the letter, which is now completed smeared from being punched into the pool. Summer is upset because Seth is so focused on Anna and the letter and she’s getting insecure about their relationship again. Seth says it’s not like that, Anna is his friend and he doesn’t want her to leave. Summer says he should stop her then. Seth asks Ryan to drive him to the airport and Ryan tells Theresa he’ll meet her at the hotel later. Ryan turns on his jams and Seth asks what the hell they are listening to. 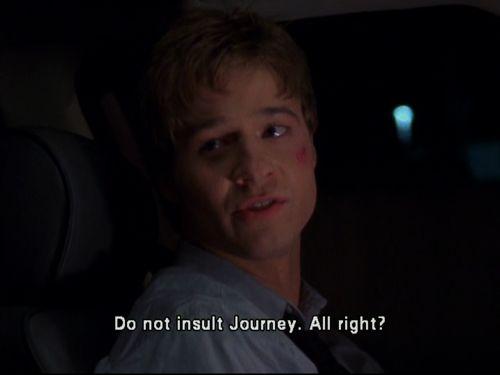 Caleb asks Julie on another date. Oh boy, looks he doesn’t know about the teenager relationship she’s involved in. Theresa returns Marissa’s dress and tells Marissa she’s leaving. Ryan drops Seth off and he and Anna have an emotional and very cute goodbye at the airport. They leave friends and Seth gets closure. Ryan shows up at the hotel to find Theresa’s room empty and her gone.

Anna: They have chin implants?

Summer: Yeah my Dad does them all the time. He says chins are the new nose.

Anna: So did Picasso.

Summer: Really what hospital did he work for? Kidding! I’m not that dumb. Just shallow.

A black guy who works at the DA talks with Sandy about the case against Drunk Uncle.

Seth asks Ryan if his kiss with Theresa had tongue action, then proceeds to ask if it’s comparable to the Britney Madonna kiss of the 2004 VMAs.