At school, Ryan confirms to Seth that he and Marissa are no longer seeing each other and will just have to go back to being friends. Seth says they were never friends before. Across the quad, Marissa and Summer have the exact same conversation. Summer admits to Marissa that things with her and Seth are weird. Sex is good now, but things are super weird in public. Theresa calls Ryan and says she’ll be in town tonight and wants to hang out. Her boyfriend, Eddie (who is supposed to be 17-18 but looks like he’s 30, comes in just as she hangs up and she shoves a suitcase under the bed and says it was a wrong number. Sketchy, sketchy. Ryan just can’t help but get involved with the girls who bring drama.

A guy named Brad comes up to Summer and Seth in the hall. He tells Summer he’s doing a kissing booth fundraiser for the water polo team. He’s the guy, and they’re looking for a girl and…..

Brad leaves and Seth asks Summer why Brad doesn’t know that they are going out now. Seth clearly isn’t okay with this, but Summer agrees. Anna shows up (back from her hiatus in Pittsburgh), just in time to give Seth relationship advice about Summer, the thing she does best. At lunch, Summer is surrounded by a group of water polo players while Seth looks on in frustration. Anna remarks that it’s interesting to see Summer and Seth being a couple so well. “Your closeness, it’s overwhelming.”

At The Newport Group, Caleb tells Kirsten that his business partner Shaun has been arrested for being drunk and stumbling into a room at a hotel. Caleb wants Kirsten to ask Sandy to make it go away and Kirsten says Caleb will have to ask for his help himself. Caleb does go ask Sandy for help and says it’d mean a lot to him if he helped.

Sandy: Did Kirsten ask you to say that?

Caleb: She thinks you’re going to say no.

Sandy: Well, my wife knows me pretty well. But, you know, sometimes I like to surprise her. I don’t want her to go and get all conceited and stuff.

Sandy says he’ll look at the report and make some calls and see what he can do. Sandy goes home and tells Kirsten. Sandy asks who this ‘uncle’ Shaun even is. Kirsten says he’s a consultant. Sandy meets with drunk Uncle Shaun to discuss his case. Sandy nails Shaun down on the fact that the guy whose room he ‘randomly’ stumbled into was actually a guy in the lumber business who was in town to negotiate something with the Newport Group’s chief rival. Sandy guesses that the room he stumbled into had some important documents in it. Uncle Shaun essentially threatens Sandy says that if he ends up sitting down with the DA there’s no telling what he would say (essentially threatening Kirsten). Sandy tells Caleb he won’t take the job and Caleb says that if he doesn’t Kirsten is screwed.

Julie shows up at school for a parent teacher conference and flirts with Luke in the hallway until Jimmy shows up. He acts in a supremely obvious way that they are definitely having sex. After the conference, Julie thanks Jimmy for doing such a great job with Marissa and Julie tells him she’s not seeing Caleb anymore and she’s much happier now. Marissa finally corners Ryan and they commit to being friends. They make plans to hang out after school.

Seth and Summer have sex after school and Seth asks why she ignored him all day at school Summer say she wants their relationship to be private.

Marissa and Ryan play video games after school and it’s super awkward. Theresa shows up just as Marissa is leaving and things are even MORE weird.

The next day at the Mermaid Inn, Luke and Julie bang o rang. Reality hits when Luke has to go to homeroom and Julie has to help Caitlin with a diorama. He leaves and passes Theresa in the hallway (who doesn’t know who he is). At school, Ryan and Marissa have lunch together and try (and fail) to make things less awkward. She asks where Theresa is staying in town while she’s working and Ryan says at the Mermaid Inn.

Anna tries to stay out of Seth and Summer’s relationship for an entire 10 seconds before telling Seth that he’s a coward and she can’t let Summer get away with this. He has to take a stand and make a gesture. Seth tells Summer that he will not have sex with her again until he can acknowledge him publicly. Summer says he’ll be crawling back in no time.

Theresa and Ryan take a walk on the beach and discuss their lives. Yawn. Theresa says she and her boyfriend Eddie are taking a break (that’s not what it looked like to me Theresa, looked like you were running away!), and Ryan says that he and Marissa are too. Ryan comes home without Theresa and Eddie is in his driveway. Ryan asks what he’s doing here. Eddie says that he’s looking for Theresa. THey’re engaged and she left without a note. Ryan lies and says he hasn’t seen Theresa.

After Eddie leave, Ryan goes over to Theresa’s hotel and she confesses that Eddie is a good guy, but she’s not sure if she can marry him. She just needs some time to figure it out.

Ryan: What are you doing for dinner?

Ryan: And don’t say you’re not hungry, I know you.

Theresa: I didn’t say I wasn’t hungry. I’m starving. Why do you think I’m being such a bitch?

Ryan takes Theresa to his house for dinner. Summer shows up at The Cohens for sex, but Seth remains strong and makes her leave.

Caleb shows up at Julie’s place with flowers and he says he misses her. It’s actually a pretty good scene that can only really be watched. Essentially she says, no thanks. So here you go:

Ryan tells Seth all about this Theresa drama, and when Ryan and Theresa go to the table, Kirsten and Sandy confront Seth about the situation, which he boils down:

Marissa is sitting on the couch moping, but Jimmy comes in and asks what’s wrong. She tells him about Ryan and her trying to be friends and Jimmy (ONCE AGAIN) gives her terrible advice to take a stand (STOP, JIMMY), and go over there and tell him how you feel. Marissa marches right over and into a very awkward Cohen dinner with Theresa and Ryan both. Telenovela indeed.

The next day Summer apologizes to Anna about how things ended with her and Seth and began with her and Seth. Anna tells SUmmer she doesn’t have to ignore Seth. Anna tells Summer that that Summer is either really evil or something else is going on. Summer confesses that she doesn’t know why SEth likes her. He’s way smarter, they have nothing in common and Summer is worried that he will get bored with her. THen when everyone knows they’re dating then everyone will know when he breaks up with her. Sounds like she needs a GRAND GESTURE OF LOVE.

Ryan goes to Eddie’s work to tell him that he did see Theresa. Ryan says he doesn’t know if he loves Theresa, but Eddie says that he does and he wants to take care of her. Eddie says Ryan can either help convince Theresa to get back together with him, or get ready for fight for her, because he’s not giving up on her. Julie calls Luke for a booty call at the Mermaid Inn and Marissa goes to the same hotel to talk to Theresa about Ryan. 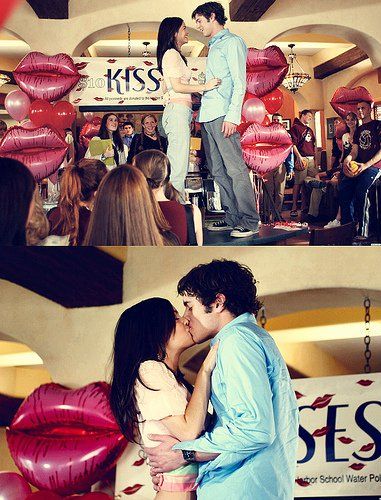 Theresa calls Eddie, but while she’s waiting for him to come to the phone Ryan shows up. They make out and presumably dooooo itttttt (this is relevant later). I give this episode 5 yawns out of 5 yawns.

“Something Pretty” by Patrick Park

Julie: I’m Marissa’s mother and you’re a student at this school. We can’t do this.

Luke: You mean it’s over?

Julie: No. I mean, in the hallway. I’ll see you tonight.

Again Theresa is kind of there? So just her.

These hats? Why did we like these hats in the early 2000s?! See below for more.