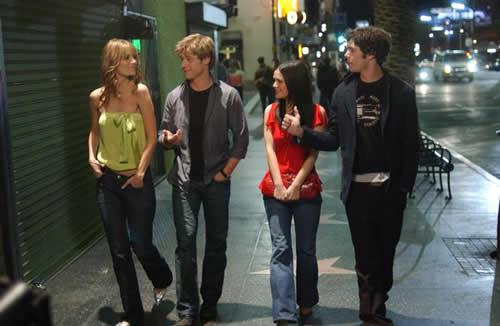 Theresa is back with Eddie, and Ryan is back at the Mermaid Inn picking up a watch he left there after he did the deed with her. Seth accompanies him and they talk about how now that Theresa is gone and Marissa is out of the picture all the lady drama in Ryan’s life is gone. He’s got a clean slate. That is until they see Luke walk out of a room where Julie is staying and watch as they viciously make out in front of them. The two book it and the next morning discuss the options of their newfound knowledge.

They both agree that Marissa can’t find out because she doesn’t handle bad news well, so they will tell Luke to end it before it comes to that. Summer and Marissa are walking on the beach discussing her relationship status and Summer suggests she be by herself for a while since she’s always had a boyfriend. They come upon a film set, and it turns out that an episode of The Valley, Summer’s favorite TV show, is filming an episode and Grady Bridges, the star of the show played by Colin Hanks, is standing right there. He invites Summer and Marissa to his birthday party the next night, which sets off all of Seth’s insecurity alarms. 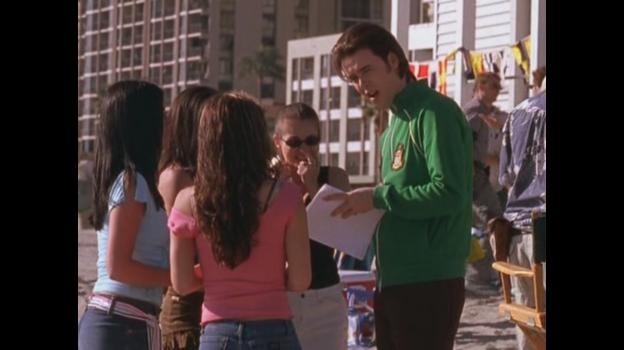 Jimmy and Sandy are both working on opening that restaurant, remember that? They’re close to opening it, but they’re running out of money. They need a designer for the restaurant still and Kirsten suggests they hire Julie because she’ll do it for free for the experience. Kirsten also gets a letter from Hailey, who says she’s out of the country again, much to Jimmy’s suspicions because he saw her in Orange County fairly recently. Julie steps in, much to their dismay, and she suggests that they ask Caleb for the money to get their restaurant up to speed. Caleb and Sandy fight a bit and Caleb tries to back out.

Caleb: I know when I’m not wanted

Sandy: And yet you’re always at our house.

In the end they have Caleb move his business meeting with Rivera Magazine, the tastemakers of Newport Beach, to their restaurant to try dishes from the menu. The idea is that if Caleb likes it he will invest in it and if the magazine people like it, even better for free publicity.

Meanwhile, Ryan goes for subtlety when asking Luke about Julie:

Ryan tells Luke to stop hitting it and start quitting it. Ryan says Marissa is going to LA for that birthday party tomorrow night and while she’s gone, Luke has to end it with Julie. Seth is watching The Valley and starts to get self-conscious about how much he is like the character that invited Summer to the party in LA. Marissa shows up and tells Ryan she’s not going to LA because she thinks her and Ryan need to have time apart. Ryan probably agrees, but he convinces Marissa to go so that Luke can break up with Julie. Luke bombards Julie at her porch and instead of breaking up with her he makes out with her and they end up getting it on. Not how you break up with someone Luke!

They show up at the party and can’t believe how old Grady looks and that he plays a teenager. A little bit of a play on how fucking old they all look. I appreciate that. Meanwhile Seth runs into Paris Hilton and she kisses him, much to Summer’s dismay. Then a stripper asks Ryan for a dance, but they are both taking for a loop when he realizes it’s Hailey, Kirsten’s sister. Guess she’s not in Europe. 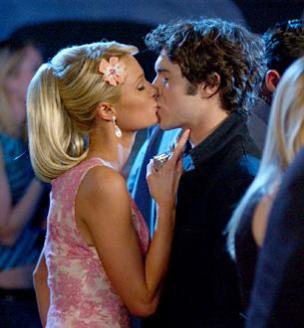 Julie shows up at the dinner after her bang-o-rang session. As Luke is driving away he listens to Ryan’s voicemail telling him to break up with Julie and he drives back to make sure it’s done. Meanwhile, Sandy is fed up with the people that will be at his restaurant if this deal works, and Caleb being in charge. He says no restaurant is better than this, but Jimmy doesn’t really have a choice. He has to make this work. Ryan calls Sandy and tells him that Hailey is here being a stripper. Sandy tells the kids to head home now, while Jimmy freaks out at Caleb and leaves as an excuse to go and save Hailey. Ryan and Marissa try to find Seth and Summer to leave and also try to work on getting Hailey out of there. Caleb is mad that Jimmy left and Sandy says he didn’t, he went to go save Hailey and Caleb is shocked by the news and decides to invest because Jimmy is a good guy. 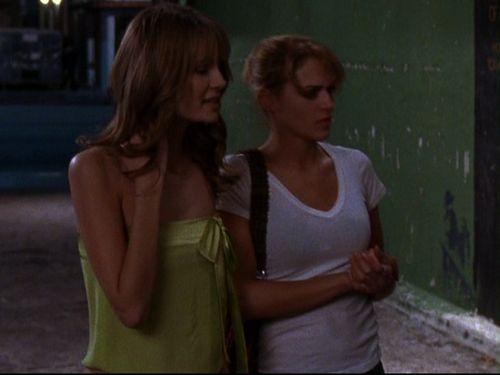 They find Hailey and Seth tries to get Hailey to leave with them. The manager of the club tells them to get out. Summer is with Grady in his limo and he tries to put the moves on her. Summer is immediately grossed out and leaves with Seth. Hailey gets fired just as Jimmy shows up to make sure everyone’s okay. Jimmy tells them to head back and he gives Hailey a ride back to the Cohens.

Julie is at the dinner still when Luke shows up at The Cohens to break up with her. Julie tells luke to wait outside her house and hide in the bushes or something. She heads back to the house and Luke breaks up with her and leaves. Julie calls Caleb like the tramp she is and sets up a date right away. Marissa and Ryan hang out in his room, and she goes back into the bathroom area. Luke shows up to tell Ryan he’s ‘Done having sex with Julie Cooper’. Marissa of course hears the entire thing and does her dramatic, “I gotta go.” Probably will end up on a coke binger next episode.

“Ride” By The Vines

Seth: Angst-Free Ryan Week. With an option for an additional week if you like it. Hey, what’s Luke doing here, did you tell him about your watch?

*Proceed to watch Luke and Julie Cooper make out*

Ryan: It didn’t even last a night.

Not a single person. And they were in LA! WHAT?

Summer: Thank god I had my camera phone, they are the autograph of the 21st century.

She was not wrong.

Also Paris Hilton shows up, which was a big deal in 2004. Now? I don’t even high schoolers know who she is anymore.

What is this Marissa? 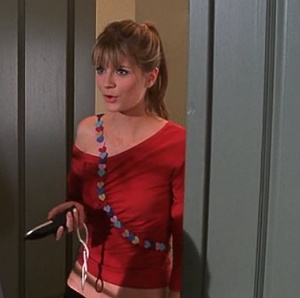