Luke and Ryan spend all night looking for Marissa who has disappeared in light of information about Luke and Julie. Seth blames Luke (obviously) and Luke says it was an accident.

Julie shows up and wants to know where Marissa is and Luke confesses that they all know and now Marissa knows to. Julie wants to talk to Ryan alone and asks if he knows where Marissa is. He says he doesn’t but Marissa called and left a message telling him she was safe but to not try to find her. Classic drama Marissa.

They boys discuss what to do next and head to the kitchen to find Hailey who they saved from the strip club the night before. As thanks she made them a large breakfast spread. Sandy comes in with a, “We have to get all the bread out of the house!” Apparently his mother is coming to visit for the Seder, and Sandy told her they do it at their house every year…even though they don’t.

Seth: I love when The Nana comes and suddenly Dad’s all Jewish again.

Seth goes to Summer’s house to see if she’s heard from Marissa. She has, but doesn’t know where she is, only that she’s okay. Summer desperately wants to meet The Nana, but Seth says she shouldn’t want to because Nana is scary, judgemental and political. Seth says he has to pick stuff up for the Seder and Summer gets schemey. Sandy is convinced that his mother is coming out to stage an intervention and put him back on the path of righteousness since now he’s left the public sector and isn’t helping poor people anymore.

Jimmy comes over to see how Hailey is doing and flirt with her. Who cares.

“The front door is wide open. A person could walk in here, take everything, and kill us all.” Meet, The Nana, who has taken a cab from the airport and walked right in the door. She is lovely! And also none of the things Seth describe her as to Summer. Everyone is shocked and confused. Why isn’t Nana being terrible and full of opinions? Seth laments to Ryan that something is up because Kirsten and Nana don’t get along and now they suddenly are. Ryan suddenly knows where Marissa is. 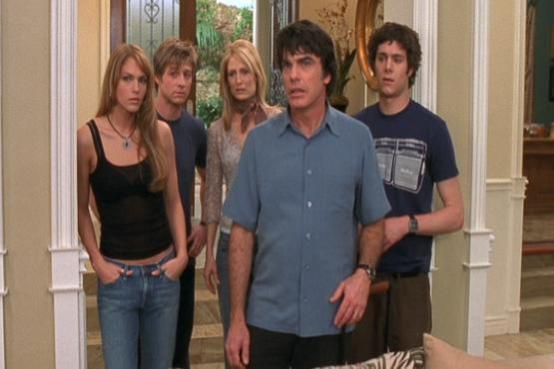 Two people who don’t get along suddenly do? Marissa is at Theresa’s place in Chino. Eddie shows up and is pissed to find Ryan. Apparently it’s Theresa and Eddie’s engagement party. Marissa tells Ryan he’s wasting his time. She isn’t coming home. Boo-hoo eye roll. 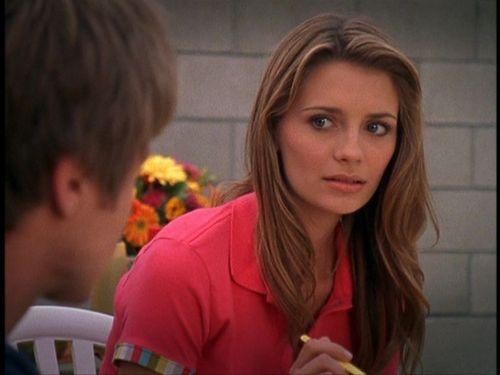 Eddie finds Ryan and tells him to get out and Ryan says he’s not leaving without Marissa. Ryan gets pushed to the ground and told to leave. MY GOD MARISSA WHY ARE YOU ALWAYS DOING THIS TO RYAN. Ryan calls Julie to tell him Marissa is safe and she tells him to bring her home or she’ll call the cops and tell them Ryan is holding Marissa against her will. Marissa sees Ryan’s arm that has been hurt in the fall from one of Eddie’s guys.

Marissa: I’m sorry this is all my fault.

Yes. Yes it is Marissa. Now get in the car and go home so Ryan doesn’t get his ass beat because of you!

Back at the house The Nana is suddenly a bitch again and admits she came to visit to say goodbye because she has advanced lung cancer and only has a few more months left to live. Nana doesn’t want treatment and they fight about it. Summer practices for her Seder speech. Nana smokes because she don’t give AF. Sandy says he called her doctor and he says he can slow the cancer down. Seth overhears the conversation and he and Nana have a heart to heart stare down.

Eddie and Ryan finally speak and Eddie forgives Ryan acknowledging that he is here for Marissa. Ryan says she doesn’t want him here though and Eddie disagrees. He says she went to the one place only he could find her. Meanwhile, Seth and Nana have a little pow-wow to discuss the possibility of Nana getting chemo. Luke shows up to talk to Marissa. Marissa slaps him in the face because obviously. Ryan semi-tricks Marissa into coming back with him telling her that if she stays there it will be too hard on him. Honestly, the dude is just trying to not have Julie Cooper throw him in jail.

Back at The Cohen’s Sandy and The Nana talk it over and she agrees to get treatment. Ryan brings Marissa back to her Mom’s. Julie answers the door and Marissa says she’s just there to get her stuff and go, threatening to tell everyone about Julie and Luke if her Mom stops her. Jimmy and Hailey talk about starting a relationship together, but not telling anyone just yet. Ryan shows up with Marissa and Summer leads the Seder and everyone has a happy ending.

Sandy: How was everything at home?

Ryan: You tell me, I was in chino.

OMG stop it you guys.

“Float On” by Modest Mouse

Ryan: I have no idea what you just said.

Seth: Yeah, they save time.

Ryan: Well not if you have to translate them.

We are back in Chino and while all the main speaking roles for Mexicans look practically white there are a few extras that definitely are not white. They won’t have any speaking roles though.

While waiting for Marissa to call, Seth falls asleep with his cell phone and the home phone. Back when people had two phone numbers…..

What is this shirt?